How I Found a Drummer: The Inside Story of the Beginning of Red Treasure 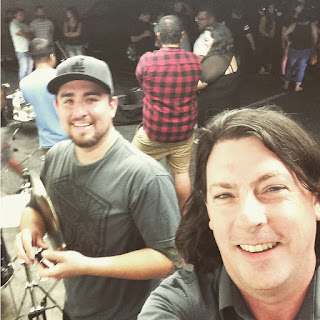 My current band Red Treasure began in November of 2015.  I was working at my day job and there was a new guy who seemed really great.  This new guy got the job in part because his good friend Scott, who was now also my friend at the day job, had let him know about the opening. Scott was a bass player, and had told me he himself had been in a band for a while that had broken up before he came to work there. At some point, either in talking to Scott or the new guy, I found out the new guy had been in that same band that had broken up with Scott.

The new guy’s name was Gabriel. He was soft-spoken, smart and kind. Scott told me he was a great bass player and a decent guitar player.  That wasn’t the best news for me - my immediate need was for a great drummer. I could sing and play rhythm guitar. I definitely wanted to have 4 or 5 musicians in the band eventually, but if I got a drummer, I would officially have a band.

I don’t remember exactly how the next part went. My guess is that Scott mentioned to me at some point that Gabriel also played the drums. I do remember that I didn’t ask Gabriel about playing together immediately after that. I recall that it seemed to hit me like a new idea sometime after that...wait, Gabriel also plays the drums. And I need a drummer.

I went to Scott first, and asked how good a drummer Gabriel was.  Scott said he was fantastic, but not to trust what Gabriel himself would say about it.

“The way he tells it, he’s not that good. He’ll tell you he’s much better at guitar. But don’t believe him. He’s amazing. He used to teach the drummer in our former band how to play the really complicated parts that he couldn’t figure out on his own.”

Scott has been known to spin a tall tale from time to time, but it’s always when he’s joking around with you, and he lets you know eventually that he was messing with you. When he’s talking about real life, you won’t find a more honest guy. So I knew that Gabriel was a great drummer.

A short while later I asked Gabriel if he had any interest in being in a band again. He told me he was definitely interested. I asked him if he’d be up for jamming with me, him on drums and me on vocals and guitar. He gave me the self-deprecating spiel Scott predicted he would, saying he hadn’t played drums ina while, so he wouldn’t necessarily be the sharpest on Day One. I told him that was fine with me.

Like all the bands I’ve ever been in, the first “jam session” was in fact our first band rehearsal. I started right off playing some of my songs, and Gabriel joined in without hesitation, making up the drum part on the fly, refining it the second time through, making it even better the third time through. There was little doubt on my side at that point that I had found my ideal band mate. And I’ve never had one moment of doubt since.