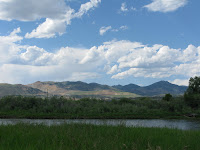 Sunday morning I drove out of Billings, Montana and got on I-90 West headed for Missoula. Again, the countryside all around me was just absolutely beautiful. I feel like I have my mind blown by the scenery every 10 minutes or so out here, it's just flat-out amazing. As I headed into the western half of the state, mountains became more prevalent on the horizon...and I mean MOUNTAINS. Huge, massive, gorgeous, rocky peaks. I had considered taking a detour south on Route 212 to go through Yellowstone National Park, but decided against it this time out. I really want to cover the West and Southwest by the end of July. I think part of this trip, though, is making a mental list of places I want to come back to with much more time someday in the future.
It was a long day but another joyous one. Just after making it past Butte on I-90, about an hour and a half from Missoula, I decided to take one little detour. I veered off onto State Route 1 through Anaconda and Philipsburg, and am I glad I did. Some of the most incredible scenery of the trip so far was on that little jaunt of an hour or so...past the beautiful, crystal-blue waters of Silver Lake and Georgetown Lake, up one side of a forested mountain and down the other, past vast, open ranches and quaint little former mining towns. About 9pm local time I rolled into Missoula, checked into a hotel, and promptly went to bed.
Yesterday (Monday) I decided I really needed a day of rest and recuperation. I had several days of all-day driving behind me and needed a day to stay put and catch up. It turned out to be just the right call. I was running low on clean clothes so I got to do all my laundry. I was able to roll into a store to pick up some things I needed, took a nice long nap in the afternoon, and caught up on the phone with a friend back in the city.
This morning I am excited to start a 2-day Nirvana/Kurt Cobain segment of the tour...I'll be hitting Seattle tonight, followed by Olympia and Aberdeen, Washington both on my way to Portland, Oregon on Wednesday. As you may (or may not) know, I am a HUGE fan of Nirvana and Kurt Cobain, and my recent song "Jagged Cross" is dedicated to Kurt and in part about him. I've read many Cobain and Nirvana biographies and seen several documentaries about them. So I've read and heard about Aberdeen, the town in which Kurt grew up, and Olympia, where he first moved to become a musician, but I really want to see them and experience them for myself.
Before I sign off, I really want to thank my friends Xtina, Brue, Jayne, Julianna, Lynn, Theresa K., Scott H. and Corynne for supporting me and keeping in touch on this momentous tour. I feel loved, appreciated and supported by all of you, and couldn't do this without you.
To the Pacific Ocean!
Posted by Collin at 7:30 AM